BREAKING: Volcano Calbuco has just erupted in Chile and people have been evacuated.


Volcano Calbuco in southern Chile erupted for the first time in more than four decades on Today, sending a thick plume of ash and smoke several kilometres into the sky.

Chile's Onemi emergency office declared a red alert following the sudden eruption at around 6 p.m. local local time (2100 GMT), which occurred about 1,000 km south of the capital, Santiago, near the tourist town of Puerto Varas.

The national emergency network Red Nacional de Emergencia tweeted out a short video from a camera at the Marcel Marchant airport that captured the start of the eruption.

About 1,500 people were being moved out of the area and an evacuation radius of 20 kilometres has been established, authorities said. 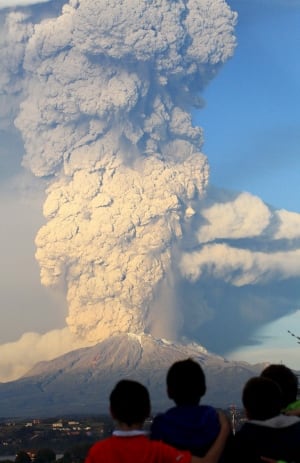 Canadian-born Trevor Moffat, who lives in Ensenada, some 10 kilometres from the volcano, said the eruption happened without warning. Volcano Calbuco's last known eruption was in 1972 and the most recent major eruption happened in 1961.

"It sounded like a big tractor trailer passing by the road, rattling and shaking, guttural rumbling ... we left everything there, grabbed my kid, my dog, got in the car with my wife," said Moffat, who was driving to nearby Puerto Varas at the time.

"All the neighbours were outside, a lot of young people crying. Armageddon-type reaction."

Pictures on television and Twitter showed a spectacular mushroom-shaped column billowing into the sky with occasional lighting bolts shooting through.

The eruption was seen in other towns at least 50 kilometres away — including in neighbouring Argentina, where the newspaper Infobae tweeted out this image taken in the town of Bariloche, mear the Argentina-Chile border.

The news agency Informaciones Chile reported that forest fires had erupted in areas near the volcano. 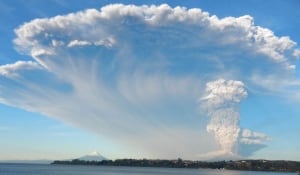 Donna Wanless had been hiking the Osorno volcano in Chile and was taking the local bus back to Puerto Varas when, 25 kilometres away, Calbuco erupted. She took this dramatic photo of the massive plume emanating from the volcano. (Donna Wanless)

"There are a lot of people out in the streets, many heading to the gas stations to fill up on gas," Derek Way, a resident of Puerto Varas, told Reuters.

"A friend told me to fill everything we have with water."

The Associated Press reported that the country's National Mining and Geology Service issued a high alert barring access to the mountainous area around the volcano.

Hernan de Solminihac, a former minister of mining and public works, was one of many in the area tweeting out dramatic photos of the massive plume emanating from the volcano.

Chile, on the Pacific Rim of Fire, has the second largest chain of volcanoes in the world after Indonesia, including around 500 that are potentially active. Calbuco is considered one of the three most dangerous of Chile's 90 active volcanoes.

In March, volcano Villarrica, also in southern Chile, erupted in spectacular fashion, sending a plume of ash and lava high into the sky, but quickly subsided.

Here are some scary on-the-run pictures from a vehicle running from the area on page 2: