And then there was noise. In many American cities, early paving consisted largely of cobblestones, on which the clopping and clanking of horses’ iron shoes and the iron-tired wheels of carts and wagons created an immense din. Benjamin Franklin complained in the late eighteenth century of the “thundering of coaches, chariots, chaises, waggons, drays and the whole fraternity of noise” that assailed the ears of Philadelphians. Similar comments about urban noise were made by travelers in  other cities. Attempts were made quite early to quiet the clamor. In 1747, in Boston, the town council banned traffic from King Street so that the noise would not distract the deliberations of the General Court.  In 1785 New York City passed an ordinance forbidding teams and wagons with iron-shod wheels from the streets.   In London good medical management required the putting of straw on the pavement outside sick people’s houses to muffle the sounds of traffic, a practice undoubtedly followed in
America. Yet the problem grew with the growing nation. As late as the 1890’s a writer in Scientific American noted that the sounds of traffic on busy New York streets made conversation nearly impossible, while the author William Dean Howells complained that “the sharp clatter of the horses’ iron shoes” on the pavement tormented his ear.

If the horse, by his biological necessities, created problems for the city, the city, in turn, was a harsh environment for the animals whose possession had once been the mark and privilege of nobility. The horse belonged to the open spaces and the battlefield. In an urban setting he was, with rare exception, a drudge. City horses were notoriously overworked. The average streetcar nag had a life expectancy  of barely two years, and it was a common sight to see drivers and teamsters savagely lashing their overburdened animals. The mistreatment of city horses was a key factor in moving Henry Bergh to found the American Society for the Prevention of Cruelty to Animals in 1866. When released from  harness, the working steed usually was led to a crowded and unsanitary stable without adequate light or air. Only the pleasure horses kept by the city’s “swells” to drive handsome rigs in the park had access to the green fields enjoyed by their country cousins. 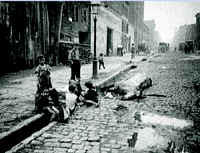 Many overworked, mistreated urban horses simply died in the city streets. Moreover, since asphalt-paved or cobbled streets were slipperier than dirt roads, horses often stumbled and fell. An unfortunate beast who broke a leg in this way was destroyed where it lay. (In order to minimize the risk of stumbles, some veterinarians recommended that city draft horses be shod with rubber-padded horseshoes, but few owners followed this advice.) A description of Broadway appearing in the Atlantic Monthly in 1866 spoke of the street as being clogged with “dead horses and vehicular entanglements.” The equine carcasses added fearsomely to the smells and flies already rising in clouds from stables and manure piles. In 1880 New York City removed fifteen thousand dead horses from its streets, and as late as 1912 Chicago carted away nearly ten thousand horse carcasses. A contemporary book on the collection of municipal refuse advised that, since the average weight of a dead horse was thirteen hundred pounds, “trucks for the removal of dead horses should be hung low, to avoid an excessive lift.” The complaint of one horse lover that “in the city the working horse is treated worse than a steam-engine or sewing machine,” was well justified.

By the 1880’s and 90’s the immense population growth of American cities, the need for improved urban transportation to keep up with the geographic spread of communities, and a growing awareness of the need for better sanitation in the interest of public health, all emphasized the drawbacks of the horse as the chief form of urban locomotion and spurred a search for alternatives. The first major breakthrough came with the development of the cable car and the electric trolley car in the late 1880’s. Traction companies were quick to substitute mechanical power for animal power on their streetcar lines.   Writing in Popular Science Monthly in 1892, United States Commissioner of Labor Carroll D. Wright maintained that electric power was not only cheaper than horsepower, but also far more beneficial to the city from the perspective of health and safety. “The presence of so many horses constantly moving through the streets,” wrote Wright somewhat ponderously, “is a very serious matter. The  vitiation of the air by the presence of so many animals is alone a sufficient reason for their removal, while the clogged condition of the streets impedes business, and involves the safety of life and limb.” While electric-powered transportation began to make inroads on the horse’s domain, improvements in the gasoline engine made it clear that the automobile would soon be a viable alternative.  Even the bicycle craze of the nineties reminded many that horseless commuting was possible over reasonable distances. Horse lovers became defensive about the future of that quadruped. Writing in the Chautauquan in 1895, Robert L. Seymour maintained that while the “cheap horse” might be doomed, the “costly, good-looking horse, the horse of history, the heroic horse in action, will probably last long.” Can you imagine, asked Seymour, “Napoleon crossing the Alps in a blinding snow storm on a bicycle or Alexander riding heroically at the head of his armies in a horseless carriage?”It is hard to blame Seymour for not having the prophetic gift to foresee tank commanders dashing ahead of their squadrons. A more fundamental error seems to have been made by a writer in Lippincott’s Magazine who insisted that since “Americans are a horse-loving nation … the wide-spread adoption of the motor-driven vehicle in this country is open to serious doubt.” Less romantic observers, however, embraced the possibility of the elimination of the horse with enthusiasm. When William Dean Howells’ fictional traveler from the nonexistent, Utopian land of Altruria visited Chicago’s World’s Fair of 1893, he noted with pleasure that this metropolis of the future had “little of the filth resulting in all other American cities from the use of the horse.”