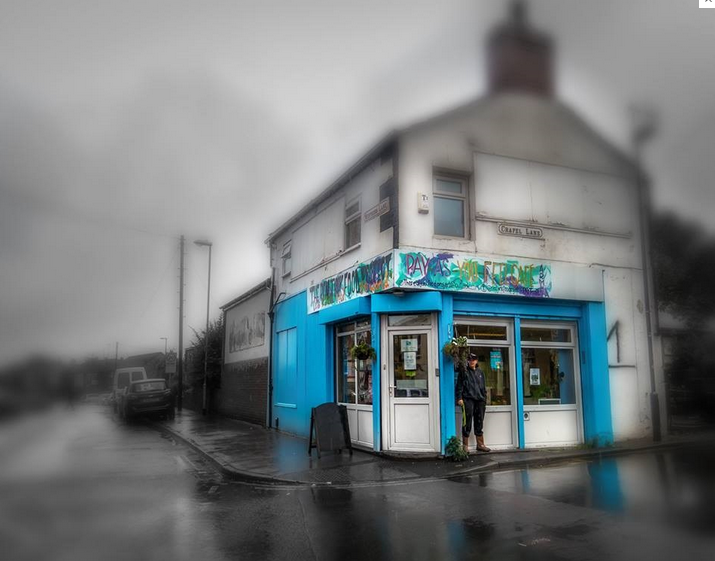 The founder of a quietly-growing empire of social cafes has called on a change in the law to prevent the UK’s "criminal" levels of food waste - especially by supermarkets - while so many go hungry.

Adam Smith, founder of The Real Junk Food Project, in Armley, Leeds, feeds his punters on goods that would otherwise have been thrown away by supermarkets, independent grocers and food banks.

The 29-year-old trained chef cooks up stews, casseroles, soups and cakes with the unwanted food, charging a “pay as you feel” policy - allowing punters to pay what they feel they can, and if that is nothing, they can help with the washing up.

The cafe has had such resonance in a world with such high food wastage and high hunger levels it has inspired 47 other "pay as you feel" cafes to spring in the past few months in Manchester, Bristol, Saltaire – with the concept even exported as far away as Los Angeles and Brazil, Warsaw and Zurich.

But Mr Smith says The Real Junk Food Project – which is in the process of being registered as an official charity – is about more than simply feeding those who might otherwise go hungry. "It is bringing people from different demographics together that doesn't involve money. People are opening Junk Food Projects because they have had enough of what is going on in society and care about what is happening to other human beings," he said. "It is a revolution."

Mr Smith wants the law to be changed to prevent supermarkets throwing so much food away for fear of prosecution - and he wants more pressure on supermarkets to be compelled to work with organisations like his.

Currently, a retailer will be prosecuted if it sells food after the use-by date, but not before the "best-before" date.  Despite this, supermarkets from across the sector regularly throw food out before its "best-before" date and, in Mr Smith's experience, are scornful about working with enterprises like his, which would happily take it.

"Supermarkets are a pain in the arse," Mr Smith said. "They do not want anything to do with us.  Many look down on us, I've had one manager of one well-known supermarket even spit in my face.  We are breaking the law in their eyes. But we want to fight the law and take the fight to the general public."

Mr Smith said the cafe regularly sources its food from some rather unorthordox sources.

"We regularly take food from supermarket bins if we have to," he said. "We watch them throw it away, then we go and take it back out again 10 minutes later. Over 90% of the goods are perfectly fine."

He said he recently took several jars of caviar which did not go off until December 2015 from one supermarket bin and he has also served punters salmon, scallops and even steak in his cafe from donations.

However, the tide is starting to turn, and Mr Smith revealed he is currently in talks with a national supermarket to provide food to his cafe. Nandos restaurant chain has also been "fantastic" and has agreed to help Real Junk Food Projects around the country. "We now get all our chicken from them," Smith said, which equates to around 100-150 kilos of frozen chicken a week. "They have a 'no chuckin' our chicken' motto" he said, adding: "They give it to us because legally we will take responsibility for it."

When asked if he was concerned about being prosecuted under the law himself, Mr Smith said:"Environmental Health came to inspect us and gave us three out of five stars. Everyone is completely aware of what we are doing. We want the law changed on best before dates to get better regulation – we have fed 10,000 with this food and not one has got ill."

Customers at The Real Junk Food Project, in Armley, Leeds

Andrew Opie, British Retail Consortium director of food and sustainability, said redistribution of surplus food at retail level only makes a small contribution to alleviate poverty and is "not a solution to hunger in the UK."

"We currently have both food poverty and food surpluses and retailers have proved very willing to step up and make sure that useable excess stock goes to charities and redistribution organisations across the UK."

The publication of an all-party report into Hunger in Britain last week revealed 4m people in the UK were at risk of going hungry, while 3.5m adults could not afford to feed themselves properly, and 272 food banks had sprung up across the UK.

"Attempting to respond immediately to lift free of hunger our fellow citizens, we see as an equivalent to a social Dunkirk," it found. "This extraordinary achievement has been done without the assistance of central government."

The report added: "We believe it is indefensible that huge numbers of people are going hungry in a country which wastes such vast quantities of food that is fit for consumption," it added, whilst urging the Waste and Resources Action Programme (WRAP) to set food retailers and manufacturers targets of doubling the proportion of surplus food they redistribute to food assistance providers and other voluntary organisations.

After the report was released, Conservative peer Baroness Jenkin of Kennington sparked controversy by saying that hunger in Britain was caused in part because people didn't know how to cook.

Mr Smith agrees more needs to be done to teach people the basics of cooking in schools.

"We cook the basics in the cafe because many people don’t know how to do the basic things with food," he said. "I know people who think they don’t know how to make a fruit salad and they are 40-years-old. They didn’t get it was just chopping up fruit and putting it into a bowl. We have realized there is a serious lack of basic education in the UK in terms of food awareness, what to make and where it comes from

"We cook basis sides, sauces, stews, casseroles, cakes, to get people eating this sort of food again and it is so easy to make."

A new "pay as you feel" cafe which opened in Saltaire, West Yorkshire, at the weekend, The Saltaire Canteen, hopes to address this issue by providing cookery workshops for single men.

It too hopes to strengthen the community with the free cafe.

Andy McNab, local outreach coordinator for St Peter’s Church in Shipley, who is running the cafe, said: "We want to debunk some of the stereotypes about the people who use food banks. The reality is anybody can end up using one. It doesn’t take anything to get into a place where someone ends up losing their job and their social networks weren’t as strong as they thought they were to fall into food crisis. It can happen very suddenly."

Despite the success of his cafe "revolution" and its spin-offs, Mr Smith has come across a hurdle - the landlord of the building where it is based has offered to sell it to Mr Smith, who is now trying to raise £130,000 to buy it and carry on running the project in there. He has set up a crowdfunding platform onIndiegogo, where he has already raised £9,786.

He said: "I am confident we will raise enough money to buy the building, the fundraising hasn’t been going on for very long and there have been pledges coming in from all over."  Source

A Man Uses A Rake…

What makes your day…

When You See What…

Off Grid Kids - This…