Steve and Ed took off a week in June to work on the cabin, with Jim for part of the week: 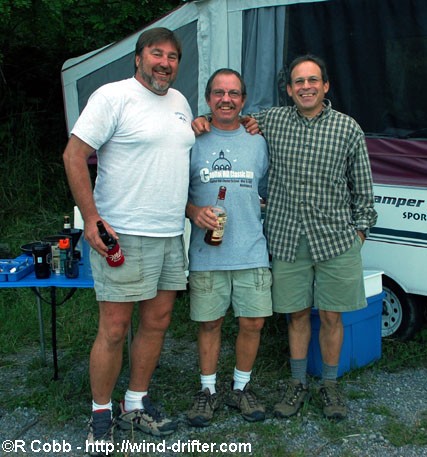 This week's main project was the loft. First task was to layout and install the main central beam:

Once the beam was installed on the columns and leveled and plumbed, mortises were cut for the joists:

The joists are old hand hewn yellow poplar, mortised into the central beam and the wall logs. 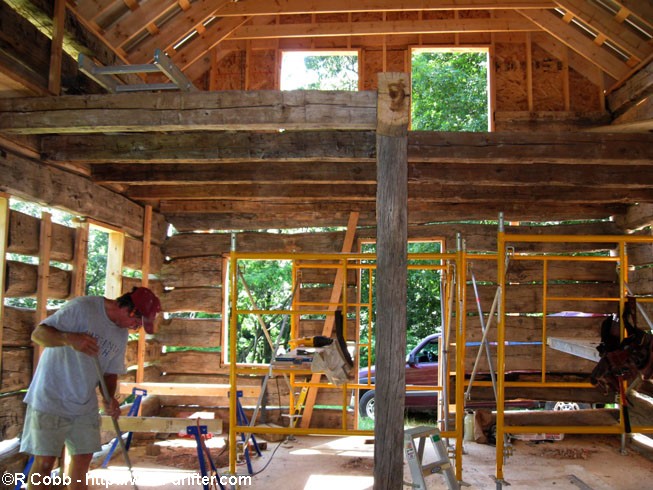 With the remaining time, Ed and Steve started on the window framing. The openings as built were certainly not sized to accomodate standard windows. Time was spent figuring out how to make standard size openings, and working out the technique on two openings, which are now ready for windows.

Time for another Steve Check: 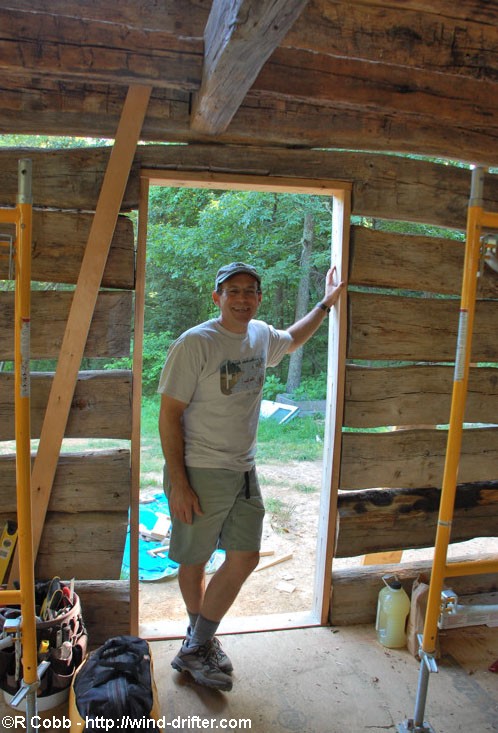 Looks like he's happy with the progress. Not everyone was as happy, though. Steve's dog, Moses, was bitten by a rattlesnake earlier in the week, and two days later there was still fluid in the chest and a swollen leg: 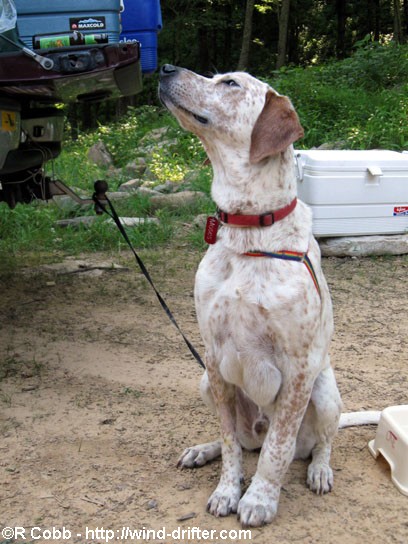 The sub-flooring is the next task, with help from Bob and Kathy. Vapor barrier also installed in the crawl space:

Finishing the last bit of framing around the hearth: 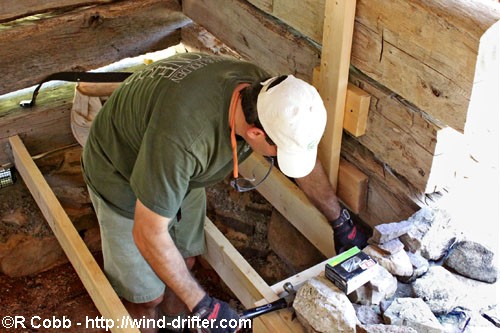 And the last pieces of sub-flooring are dropped in place:

Labor Day weekend - the chimney begins. Chimney work is slow going, because its mostly corners. This project is going to last a while. 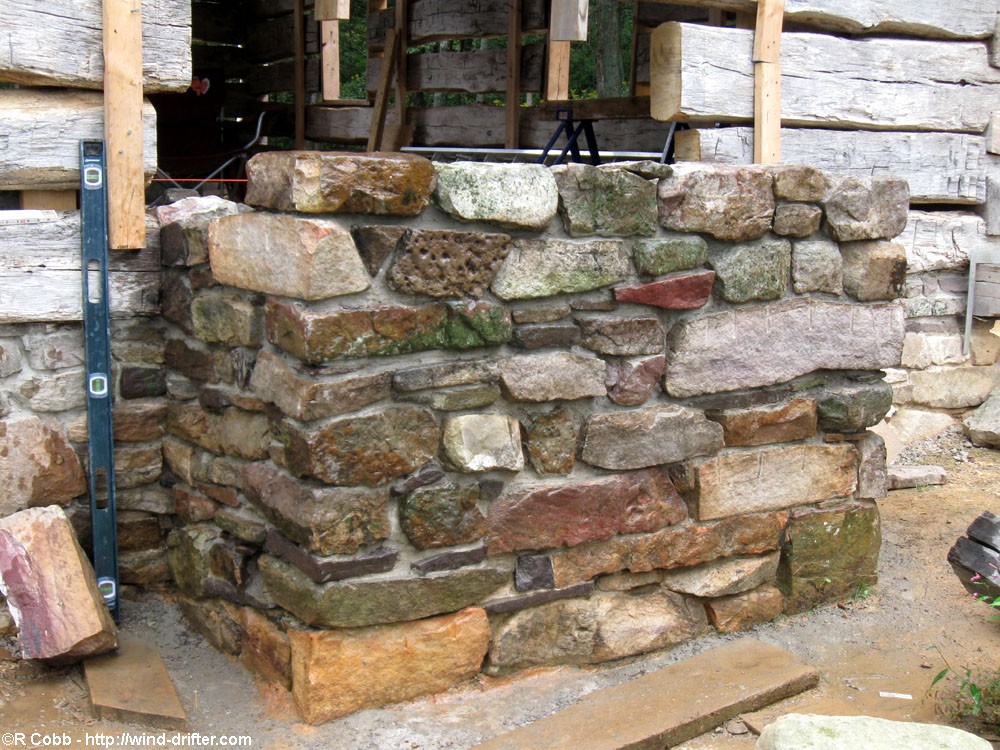 Sept 20-25 - Ed and Steve put in a week on the cabin, bracketed by Virginia Tech football games on both ends (Tech won both). Yours truly was there for the first, mostly organizing day. Here's what it looked like then, with only one upper window having been put in so far. Not quite ready for furniture yet, but now you can at least imagine it:

The planned tasks for this week were windows and chestnut siding in the gables. The two upper windows had been properly framed previously, and those windows went in easily: 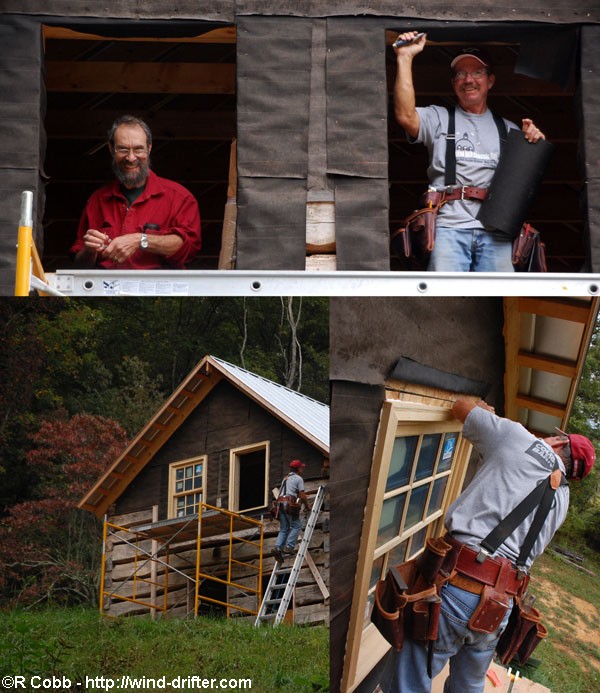 All the other windows (and doors) had only been approximately framed during cabin assembly. Those frames had to be completely redone, often with considerable trimming of logs to get everything square and of the right dimensions: 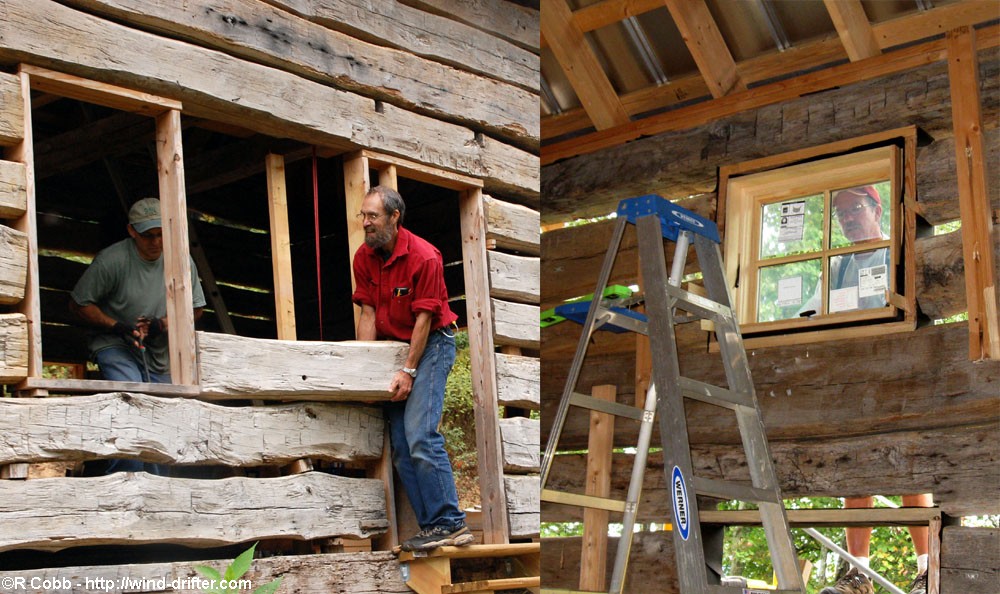 At the end of the week the windows are all in except one that was not the right size, the chestnut siding is in the gable, and the framing is ready for the door: 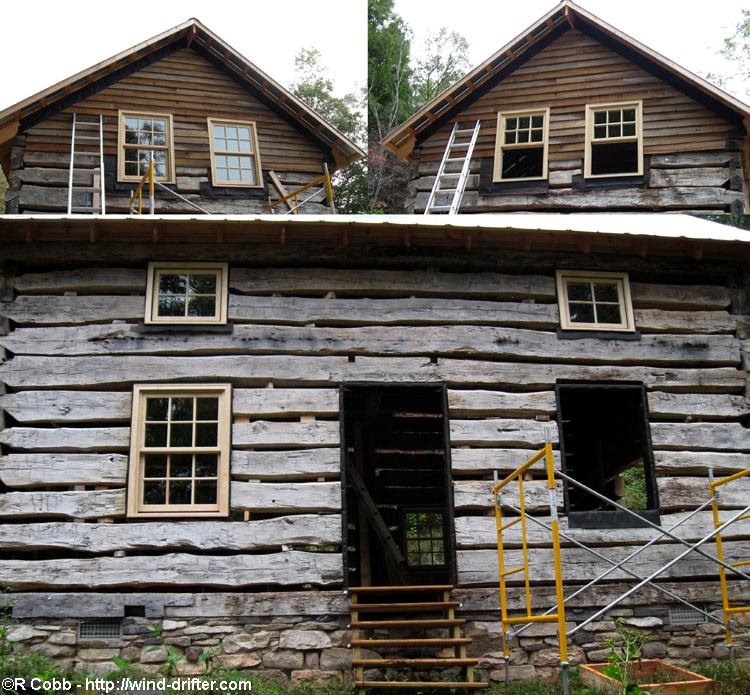 I topped out the stone fore-hearth yesterday, and poured the concrete slab for the hearth today. The next step is to lay the fire brick. Probably wait until spring for that. I can still continue with the chimney until the weather gets too cold for it. 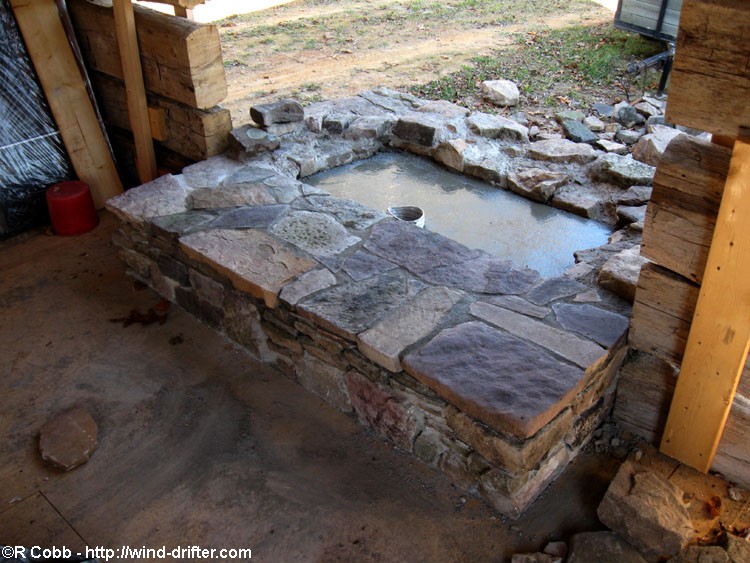 Ed and Steve put in a week of installing the loft flooring and stairs. The stairs and other materials were recycled from various locations. The stairs came from an old farm house that belongs to a hang gliding landing field owner. The flooring is compliments of my Uncle Tom, and it came from an old farmhouse called the Nannie Taylor place on my Grandfather's old farm. My parents lived in that house in 1954, and several other family members also called it home at various times. On the last day Pete helped install the last 2 windows.

The night before we did the staircase, I woke up and realized that I had to chink the inside before we built the staircase and forever blocked my access to the wall. I had to scramble to get it done in a hurry. 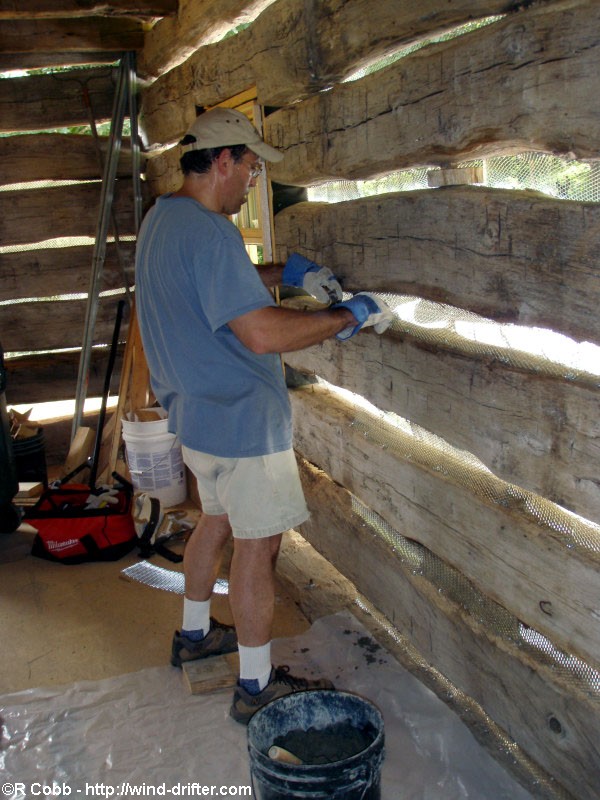 Ed built the landing while I did the chinking. 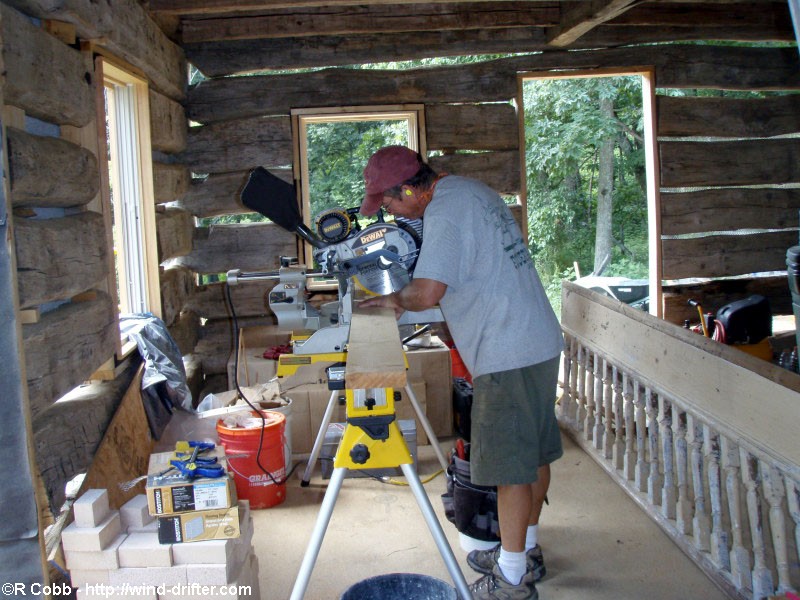 This captures the nervousness that goes with cutting a straight staircase to make a L-shaped staircase. Are we sure we measured and figured it right? 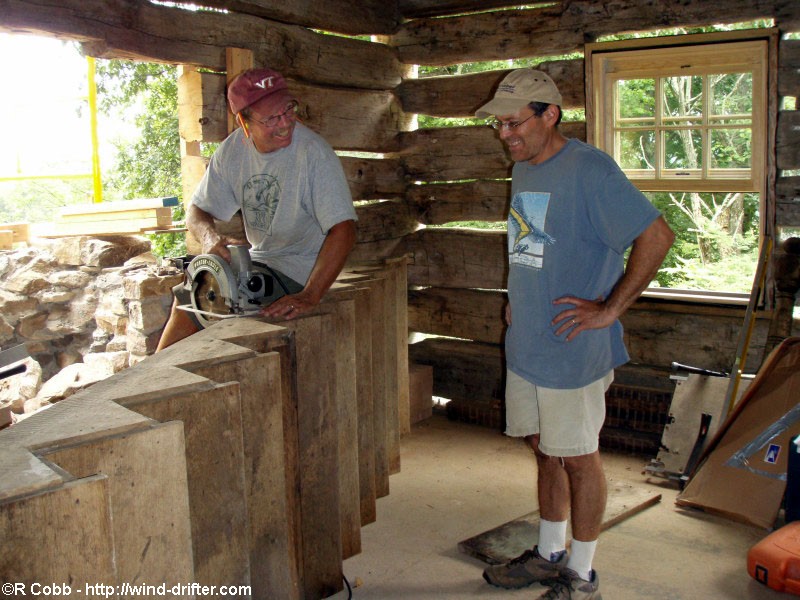 It's in two pieces - no turning back now. 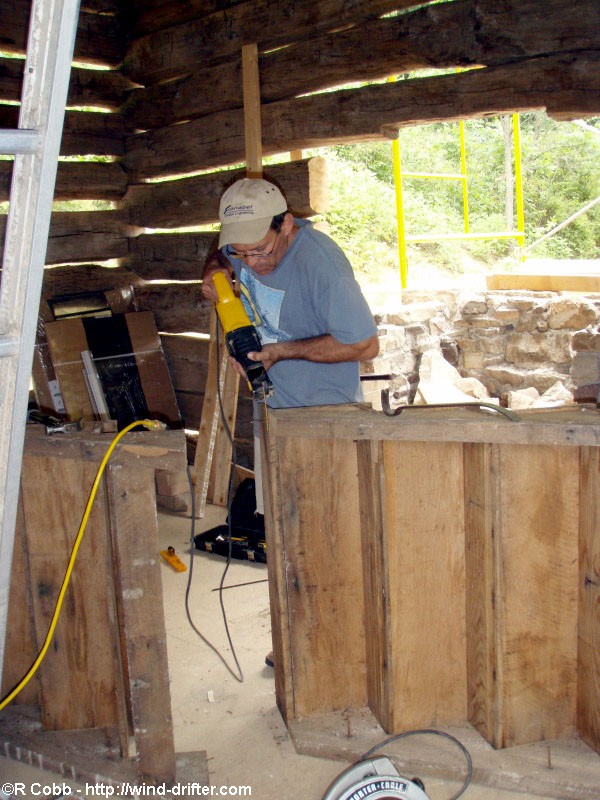 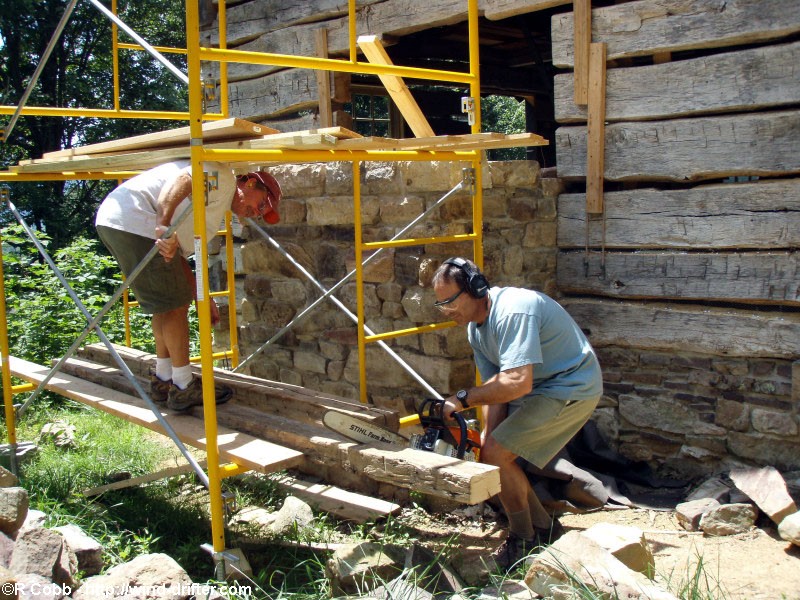 Attaching the stair stringer to the header. 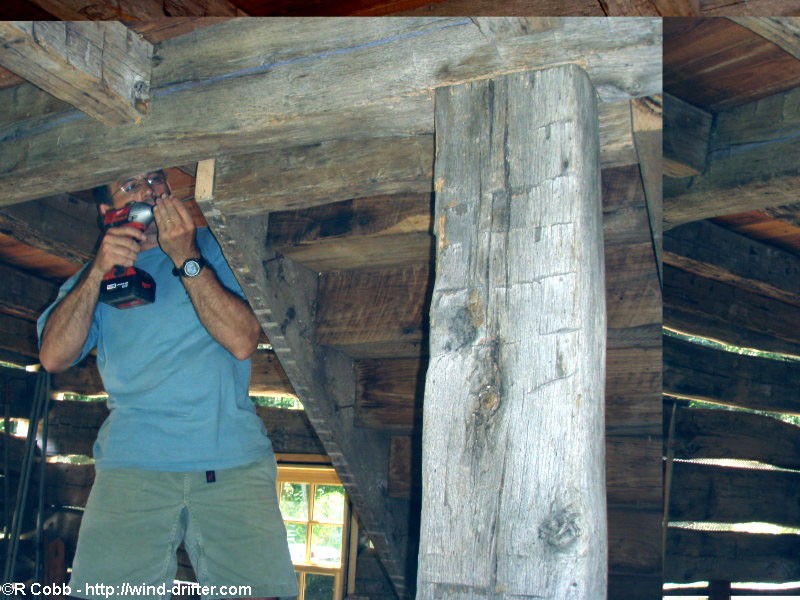 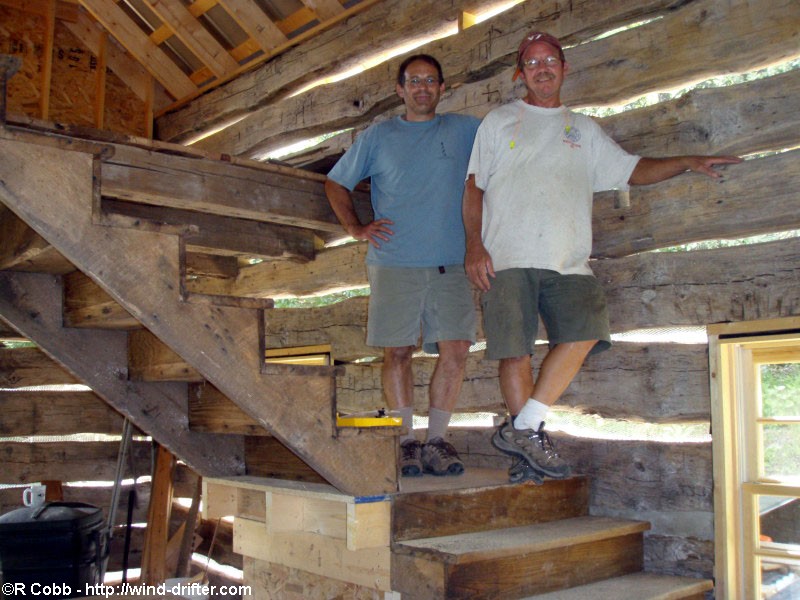 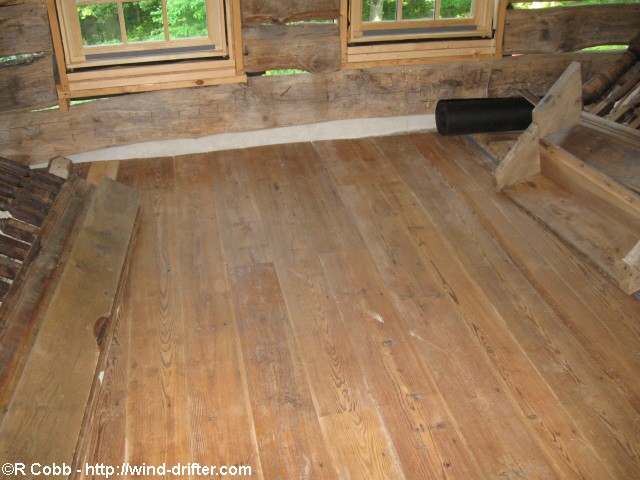 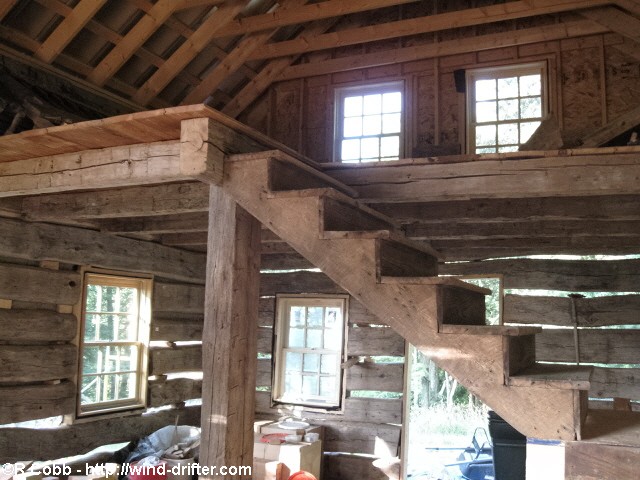 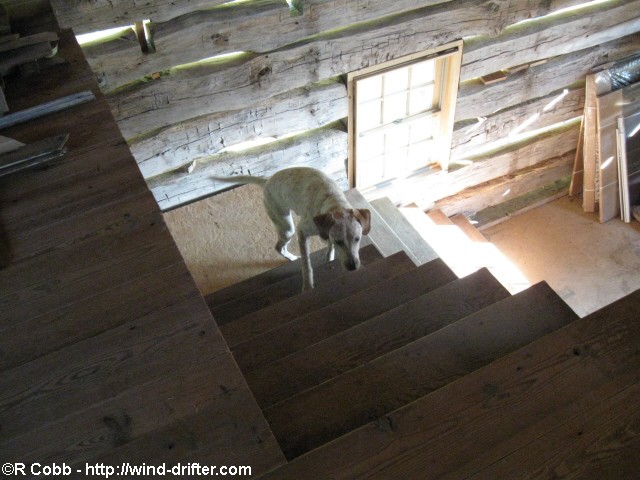 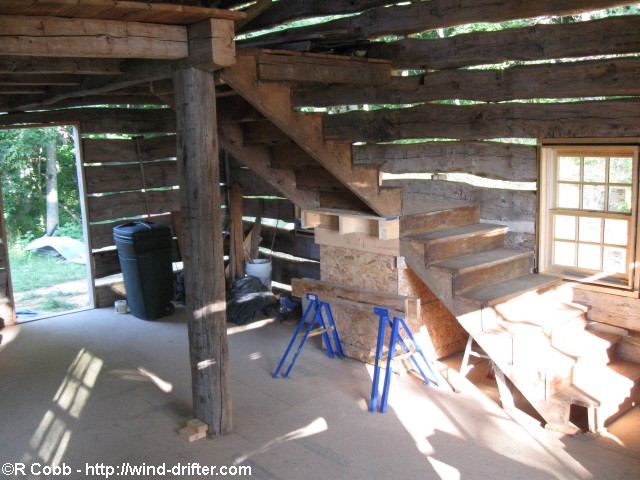 I finished chinking the front exterior today. The dark mortar in the lower left corner will cure to light gray like the rest of it, once it dries. I think I will turn my attention back to the chimney now. I haven't done anything on it for about 3 months 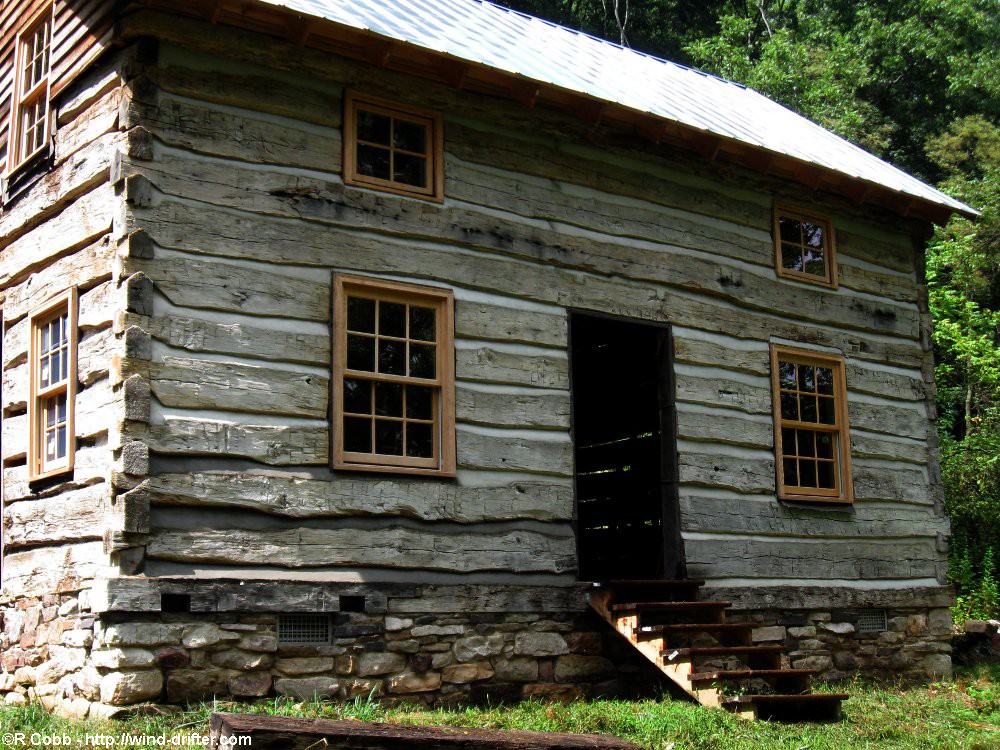 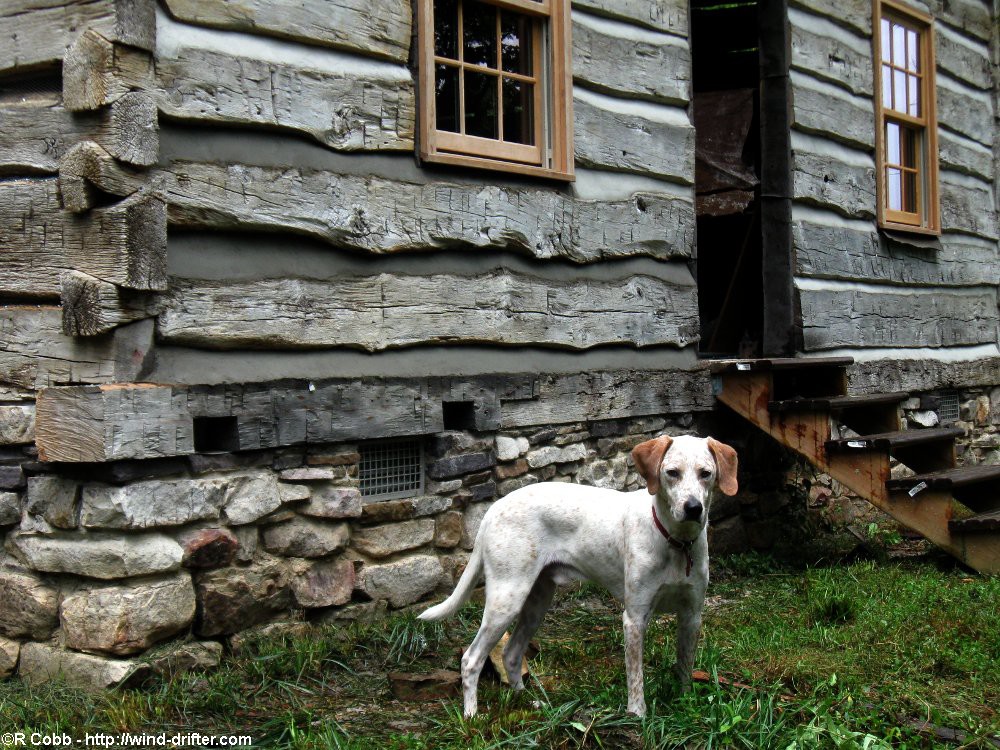 I'm so happy about this latest accomplishment that I just have to show it off to y'all that have helped me on this project. This is a Rumford style fireplace, 42" high and wide. I built the arch on Wednesday, and filled in above it today. The stones over the arch are dry-stacked for now, but will get mortared in next weekend. One day, we'll have us a big fire in it for a cabin warming party. 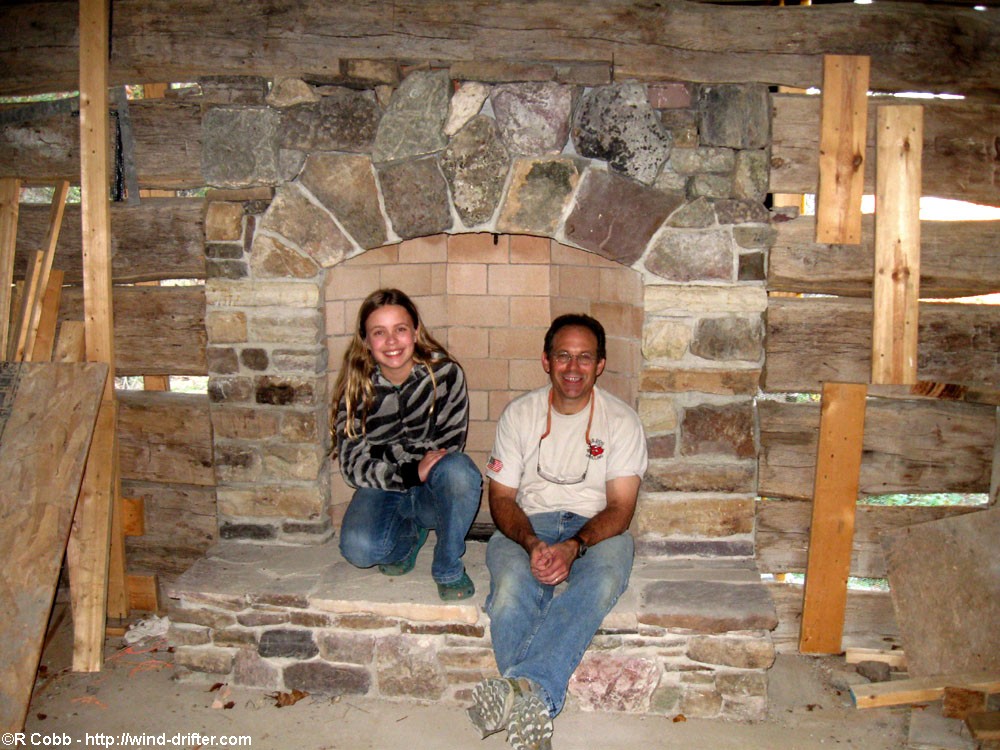