The Off Grid Battery That Runs On Air!

In the world of portable power, solar panels, generators, and rechargeable batteries are the standard. One company has proposed a new solution: A battery that runs on air. 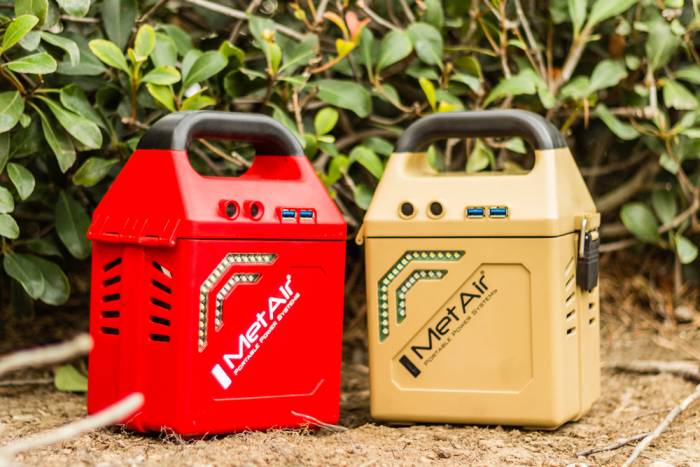 Well, not just air, but zinc and air. Combined they form what Metair Power is calling the “world’s most powerful recycleable battery.”

It works by oxidizing zinc with oxygen from the air and creating an electrical current. You insert a large cartridge into the unit, removing a covering to expose the zinc.

The company compares it to a chemical hand-warmer pack that once exposed to oxygen goes into a chemical process that produces heat.

How much power? The Metair Solstice is cited to produce 60,000 mAh at 5.0 volts, and it gives more than 190 watt-hours of stored energy. That’s enough to give off 125 hours of ambient light or charge an iPhone up to 28 times, the company touts.  At 2 amps of power draw, like with many smart phones, that's the equivalent of up to 90 "D" cell batteries in a 2.2 pound box.

You swap in a new cartridge once it’s used up, and you're ready to go again!

The unit has two USB ports, an array of red and white LED lights, hazard flashers, and a strobe.

It's about time we get some competition in a field that has been dominated by big corporations that have cornered the market, and battery prices just seem to go up and up.  Here we have a product that requires less material, is cheaper to ship, provides more power, is more efficient than any battery on the market, and they're just getting started!  Once production is in full swing, who know's what kind of effect this will have on the battery storage industry, but it can only be good for the consumer. 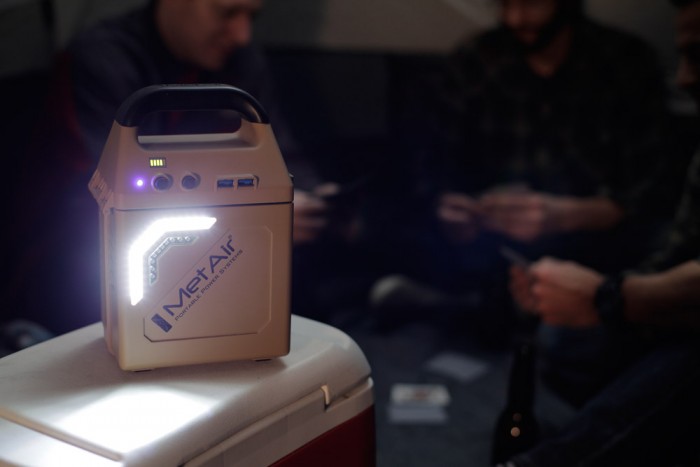 Met Air is seeking funding through a Kickstarter campaign to get production volume up for the next order.

At $89 for the case and battery included, the company offers a new kind of portable, reliable power for the backcountry or anywhere off-grid in this 2.2 pound pack!  Click to watch their video on Kickstarter and learn more about it.

At under 25 pounds for the replaceable battery cartridge, the MetAir® Ranger is self-contained and ready to grab and go. A single MetAir® Ranger replaceable battery cartridge is approximately one third the weight of one deep cycle (heavy duty) marine lead acid battery yet provides nearly TEN times the specific energy – an extremely high energy-to-weight ratio. In fact, MetAir® power generation products offer the highest energy density of any commercially available primary disposable battery, and at the lowest cost per kilowatt hour: