Scientists in China have developed an innovative solar panel technology that could turn raindrops into electric power.

The new solar cell design, which can be “triggered” by both rain and sun, is described in a paper published in the Angewandte Chemie journal.

“All-weather solar cells are promising in solving the energy crisis,” explain the scientists from Ocean University of China and Yunnan Normal University, noting that the technology combines an electron-enriched graphene electrode with a dye-sensitized solar cell. “The new solar cell can be excited by incident light on sunny days and raindrops on rainy days,” they add.

The new technology could guide the design of advanced all-weather solar cells, according to the scientists.

"We would like to create a solar cell that can produce electricity on both sunny and rainy days," explained Ocean University of China Professor Qunwei Tang, who is the paper’s lead author, in an email to FoxNews.com. "We believe the all-weather solar cell will be used for families in future." 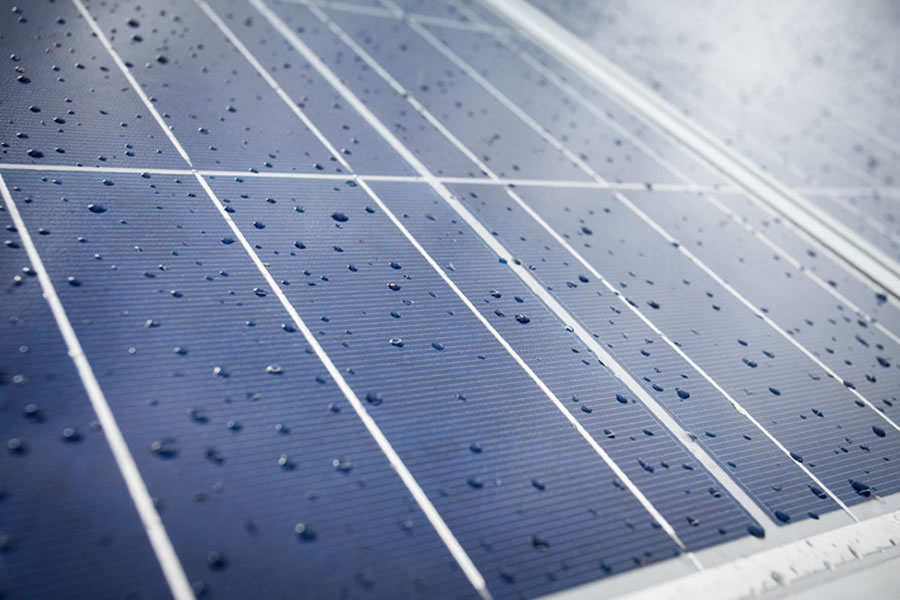 The Science News Journal notes that, by using a thin layer of highly conductive graphene, the solar cell could effectively harness power from rain. “The salt contained in rain separates into ions (ammonium, calcium and sodium), making graphene and natural water a great combination for creating energy,” it reports. “The water actually clings to the graphene, forming a dual layer (AKA pseudocapacitor) with the graphene electrons. The energy difference between these layers is so strong that it generates electricity.”

"During the expansion of raindrops on graphene surface, the delocalized electrons can be dragged by the cations [positively charged ions], charging the pseudocapacitance," said Tang, in his email to FoxNews.com.

Tang adds that the research on all-weather solar cells is still in its preliminary stage, noting that the cation concentration of real rain is lower than the simulated raindrops used to produce the report.

Vasilis Fthenakis, a senior research scientist and adjunct professor at Columbia University who did not participate in the paper, told FoxNews.com that, if the technology’s additional costs and potential solar cell optical losses do not exceed the benefits of rain-harvested energy, it could be used in climates not typically associated with strong solar energy. "The dye-sensitized cells where this is applied are not the type of technology that would be deployed globally as a replacement of conventional energy; they have applications mostly in diffuse-light applications, not in the high sun regions," he said, via email.

China is one of the world’s major solar panel manufacturing bases and expects to significantly increase its own use of the technology over the coming years. In an attempt to reduce its carbon emissions, the country wants to triple its solar power capacity to as much as 143 gigawatts by 2020, according to a recentBloomberg report.

U.S. firms are also looking to drive solar energy innovation. Last year SolarCity, which was co-founded by Tesla CEO Elon Musk, announced that it will make its most-cutting-edge solar panels in the U.S. The San Mateo, Calif.-based firm will build its most-efficient rooftop solar panels at a huge new facility in Buffalo, N.Y. The factory is expected to reach full capacity in 2017.